10 best activities for a bachelor party In order to organize the best bachelor party you need to have a good location. This is one of the most important things of a party, because the location sets the mood for the party.

How to organize a bachelor party in a few days? 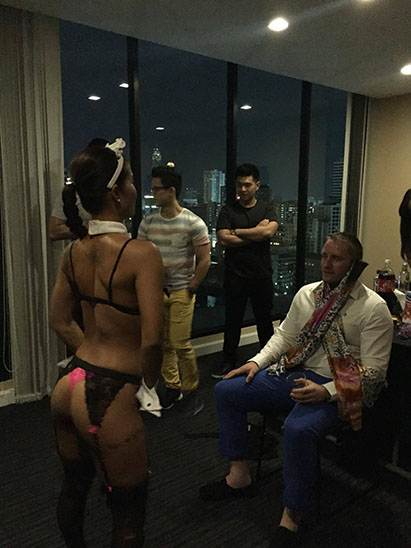 The Best Nightclubs in Phuket for your Bachelor Party The best Nightclubs in Phuket for your bachelor party Phuket is considered one of the best locations for party lovers in Thailand. Indeed, the busy nightlife and Phuket’s world-class nightclubs are considered the best places to have your stag party there. The island is blessed with beautiful beaches but it also has a distinct city […] Bangkok is known to be one of the best cities of the world especially if you want to throw an unforgettable party. There are endless possibilities which signify Bangkok’s party scene, like: hot girls and guys, super clubs, luxury villas, penthouses, day activities, modified party buses, limos and funky minivans and a lot more.

The Five Best Suites For Your Bachelor Party

When you’re thinking of an extraordinary wild bachelor-party, you probably think immediately of Bangkok – and not just because of „The Hangover II“. Bangkok has been setting the scene for endless bachelor parties for years. This experience is your last time together being crazy, irresponsible young lad as bachelors and what’s a better way to […] 10 reasons why Bangkok is the best choice Every groom-to-be deserves a bachelor party so celebrate their last night of singlehood with all his friends. And we can give you our word, that nobody should forget their night, or better nobody wishes to forget! If you want even more than in “The Hangover“ and want […]

Five Best Locations Luxury Villas for a Bachelor Party in Thailand Thinking of a bachelor party in Thailand, you’ll probably think of Bangkok and its crazy famous nightlife with their major suites. But if you want to escape the messy, noisy city but still want to celebrate your last day of single hood in a […] Based on „Hangover II“ Bangkok offers you nothing but crazy unforgettable experiences. And what movie captured it better than Hangover 2? Like Mr. Chow already said: „We had a sick night bitches, don’t you remember anything?“. If you really want know, what happened to the Wolfpack, consisting of Alan, Doug, Stu, Phil and Mr. Chow, […] Where are the best place in Asia to throw Bachelor party of your dream?
Well first thing first forget about Las Vegas, the new hype is in Asia now! Indeed, if you are looking for a Bachelor party destination, don’t search anymore Asia is made for you!